Featured on this 1973 postcard is a photo of the souvenir store run by former Governor Lester Maddox in Underground Atlanta.  Among the items for sale were ax handles (adopted by Maddox as a symbol of his defiant resistance to integrating his Hemphill Avenue restaurant, The Pickrick), buttons, photos, recordings of his speeches, "time to wake up!" politically-themed alarm clocks, etc.  Despite his roots as a segregationist, he is credited with a surprisingly progressive record during his time as Governor.  Civil Rights activist Hosea Williams, in fact, told the British newspaper The Guardian that Maddox did more for black people than any other Governor of the state.

Maddox served as Governor from 1967 -1971 and as Jimmy Carter's Lieutenant Governor from 1971 - 1975.  Elsewhere on the Atlanta Time Machine is a section devoted to Maddox and his highly unusual path to victory in the 1966 race for the job of Governor.  The summary of events related over there has been added at the bottom of this page. 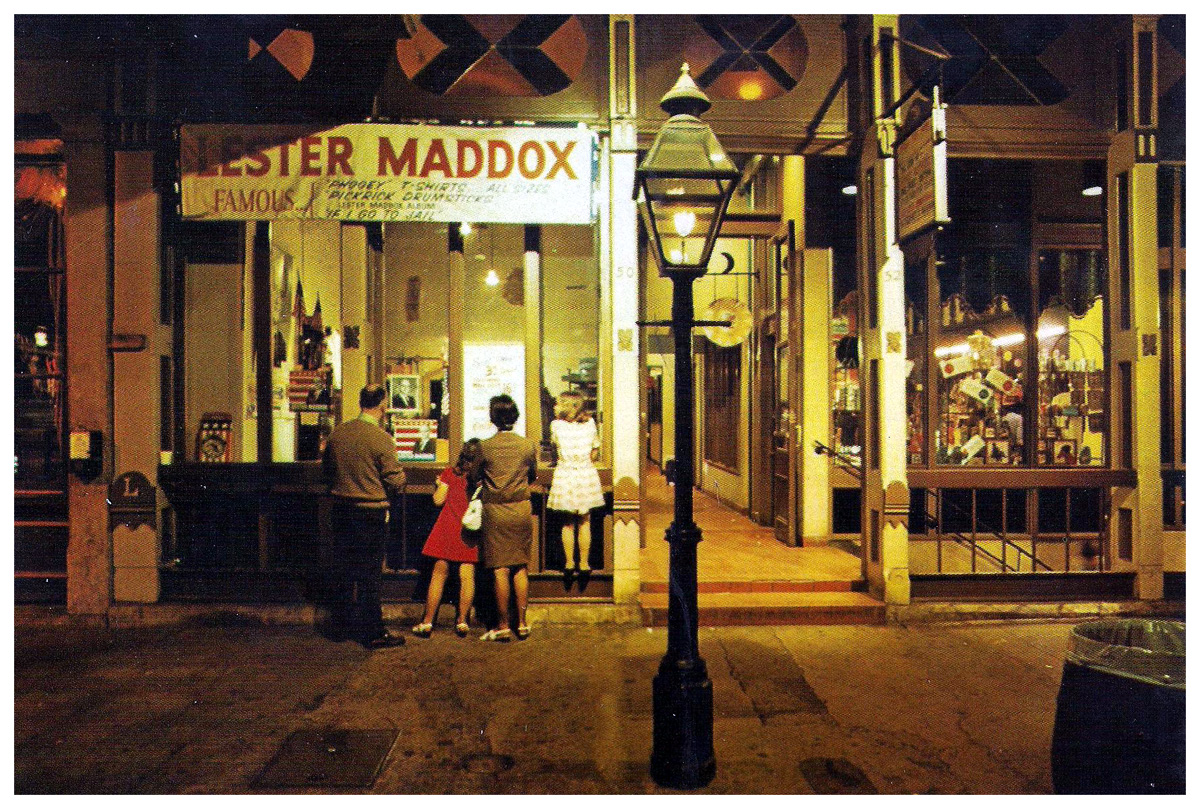 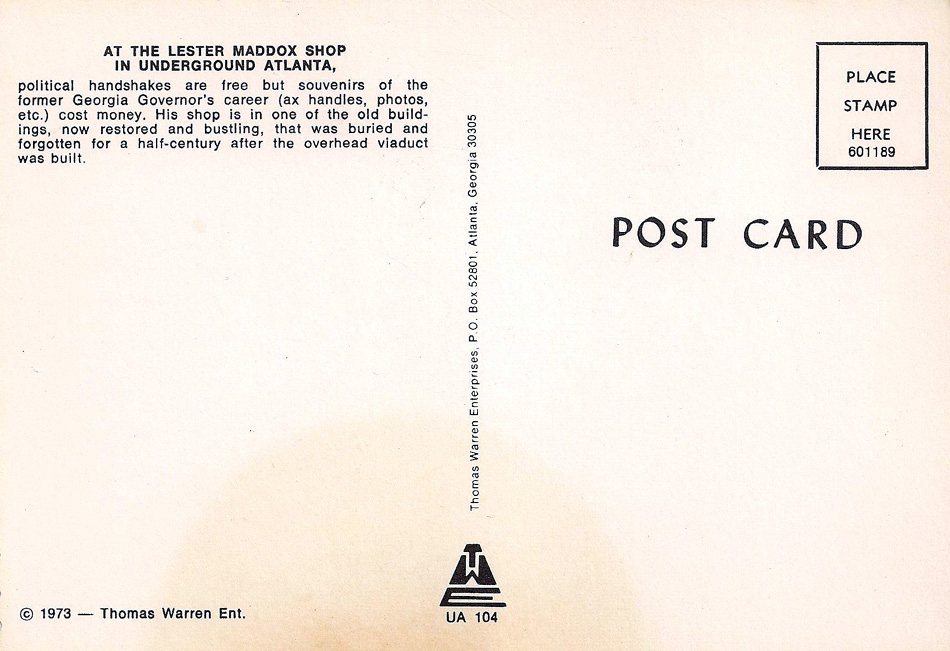 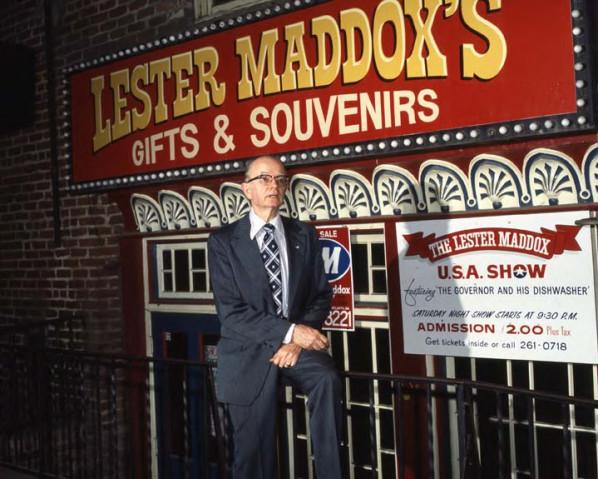 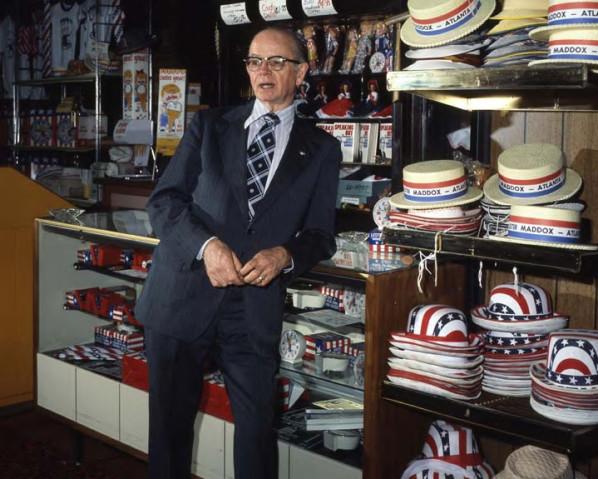 (The two photos above appear courtesy of the Atlanta History Center).

Lester Maddox And The Ga. Gubernatorial Election Of 1966

Maddox, a conservative Democrat,  had substantial competition in his quest for for the Democratic nomination in the 1966 Georgia gubernatorial election.  Probably the most formidable of those opponents was Ellis Arnall, who had served as Georgia's governor from 1943 - 1947, and was probably the most liberal candidate in the field.

In addition to Arnall, the other Democrats vying for the nomination included James H.  Gray Sr., who, like Maddox, was a conservative businessman and a supporter of segregation.  Maddox, Arnall, and Gray were joined in their quest to become the Democratic candidate in the 1966 governor's election by Jimmy Carter, who had recently become a statewide political presence after being elected to the Georgia State Senate in 1962.

Besides Maddox, Arnall, Gray, and Carter there was one other Democratic hopeful: Garland Byrd, who'd served as Lt. Governor under Ernest Vandiver from 1959 - 1963.  In the primary to determine who would represent the Democratic Party in the election,  no candidate collected enough votes to attain a majority.  Ellis Arnall won a plurality of the votes with 29.4% of the ballots.  Lester Maddox won 23.5% and Jimmy Carter won 20.9%, with the remaining votes being split between Garland Byrd and James Gray.

Since none of the candidates attained the required majority, the top two candidates, Arnall and Maddox, were forced into a runoff.

In the runoff, Arnall (unlike Maddox) failed to mount an aggressive campaign and the final tally gave Maddox 54.3% of the vote, officially making him the Democratic candidate for governor in the 1966 race.  Maddox, no doubt, won a great many votes from white Georgians, urban and rural alike, who were not yet ready to accept an integrated society.

Maddox's competition in the race would be Republican candidate Howard "Bo" Callaway, the son of developer Cason Callaway, who built Callaway Gardens, a 13,000 acre resort facility about an hour southwest of Atlanta.  Bo Callaway was a recent convert to the Republican party, having switched his party affiliation in 1964 prior to being elected Georgia's first Republican Congressman since 1875.  He was a vocal supporter of Barry Goldwater's failed 1964 bid for the U.S. Presidency.  Many Georgians, dismayed by the choice between Maddox and Calloway, both conservatives with segregationist beliefs, organized a write-in campaign for Ellis Arnall, the man Maddox had defeated in his bid to become the Democratic nominee.

As in the Democratic primary, no candidate in the general election won a majority of the vote.  Callaway, in fact, won a plurality of the votes, defeating Maddox by just over 3,000 votes.

However, because write-in candidate Ellis Arnall received 7.1% of the vote,  neither Maddox nor Callaway received a majority, as required by the Georgia constitution.

According to the election rules detailed in the Georgia Constitution, the failure of either candidate to receive a majority of the popular vote meant that the election was to be decided by the Georgia Assembly, who were to select from between the top two candidates,  Callaway (R) and Maddox (D).

So that's the long and fascinating story of how Lester Maddox, who failed to win a plurality of votes in either the Democratic primary or the general election, nevertheless became Georgia's 82nd governor.

By the early 1970's, Callaway had relocated to Colorado and was serving as chairman and president of Crested Butte Mountain Resort. He served as secretary of the army in the Richard Nixon and Gerald Ford administrations and in 1980 he successfully ran for the US Senate in Colorado

Interesting, Maddox's tenure as governor was not marked by the rampant racism that many feared.  In fact, as the New Georgia Encyclopedia points out, "he  proved reasonably progressive on many racial matters. As governor he backed significant prison reform, an issue popular with many of the state's African Americans. He appointed more African Americans to government positions than all previous Georgia governors combined, including the first black officer in the Georgia State Patrol and the first black official to the state Board of Corrections."

Incidentally, the black official appointed to the state Board of Corrections was none other than Graham Jackson.

Famed civil rights activist Hosea Williams offered this fascinating quote about  Maddox:  "Lester Maddox did more for black people than any governor in the history of the state."