Today (01/06/14) marks the day that Delta Air Lines will be retiring one of their signature aircraft: the Douglas DC-9.  Delta was the first airline to operate the original 65-seat version of the Douglas DC-9 in 1965 and used them to replace their aging post-war propeller aircraft on medium and short haul routes. The DC-9s allowed Delta to introduce jet service for the first time to smaller cities across the southeast such as Chattanooga, TN, Columbus, GA, Macon, GA, and Monroe, LA.

Like everything else on the Atlanta Time Machine's airport pages, the words and pictures here come from aviation expert David Henderson who has been studying these matters closely ever since he's been alive.

Below: A postcard featuring a 1965 photo, published by the Delta Museum in 2002. If you look in the background, you can spot signs for the space-age Gulf station and the Air Host Inn. 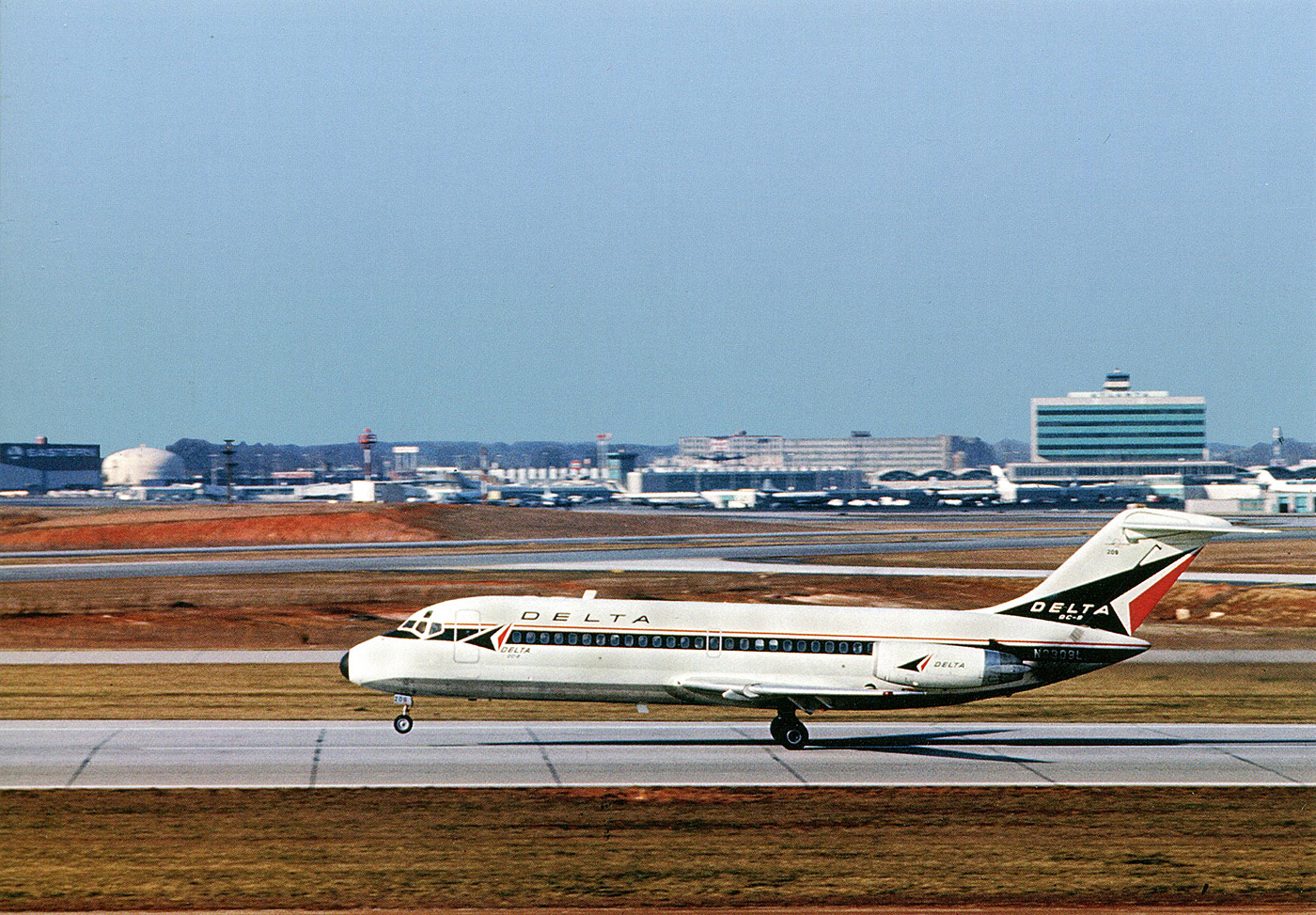 Below: A photo harvested from the 1967 Delta annual report. 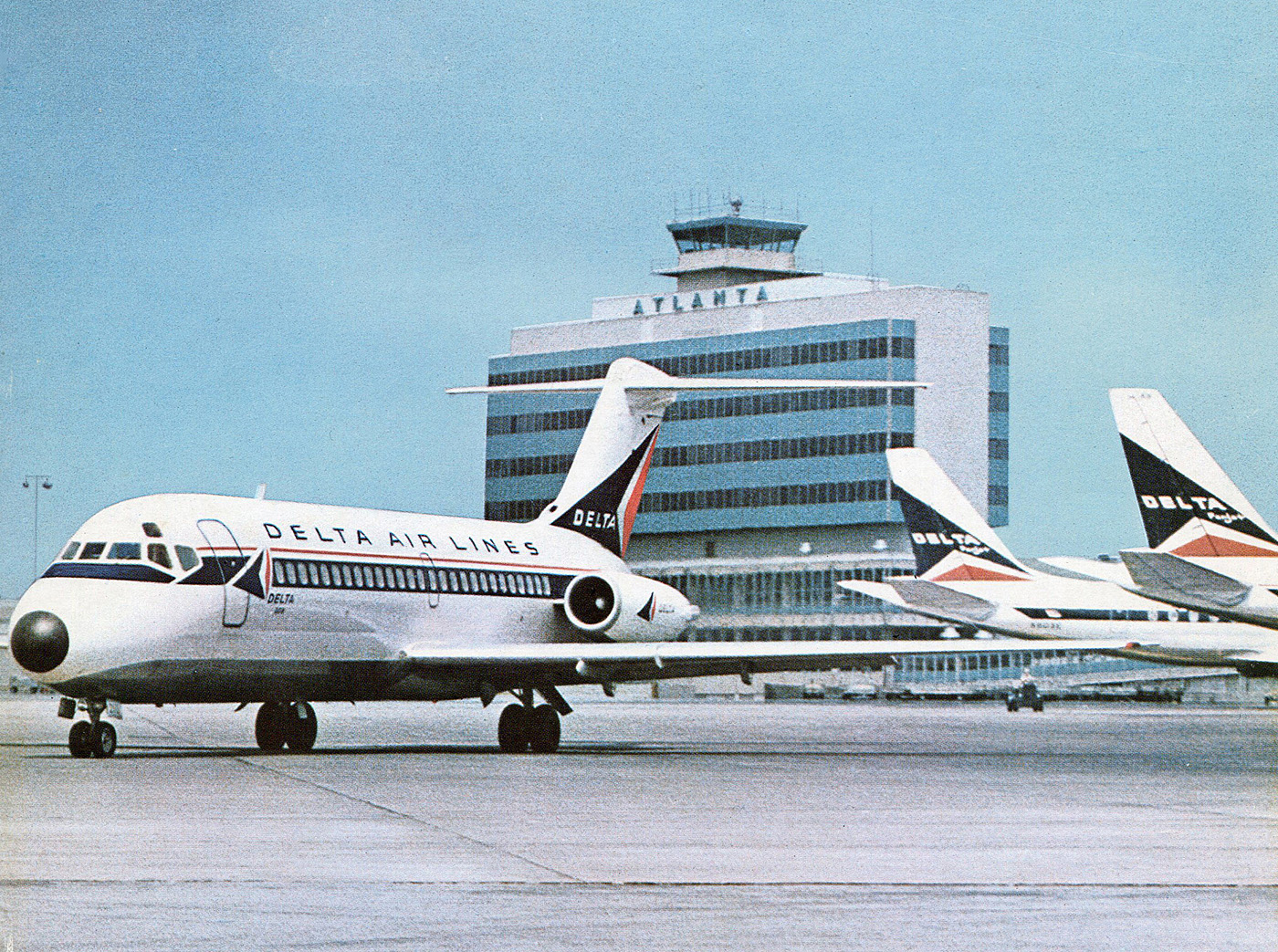 Below:  A 1968 Delta Air Lines photo showing DC-9s parked at the newly completed rotundas. This clearly shows how much gate space was gained by adding the rotundas to the ends of the existing concourses of the 1961 terminal. Concourse F is in the foreground. 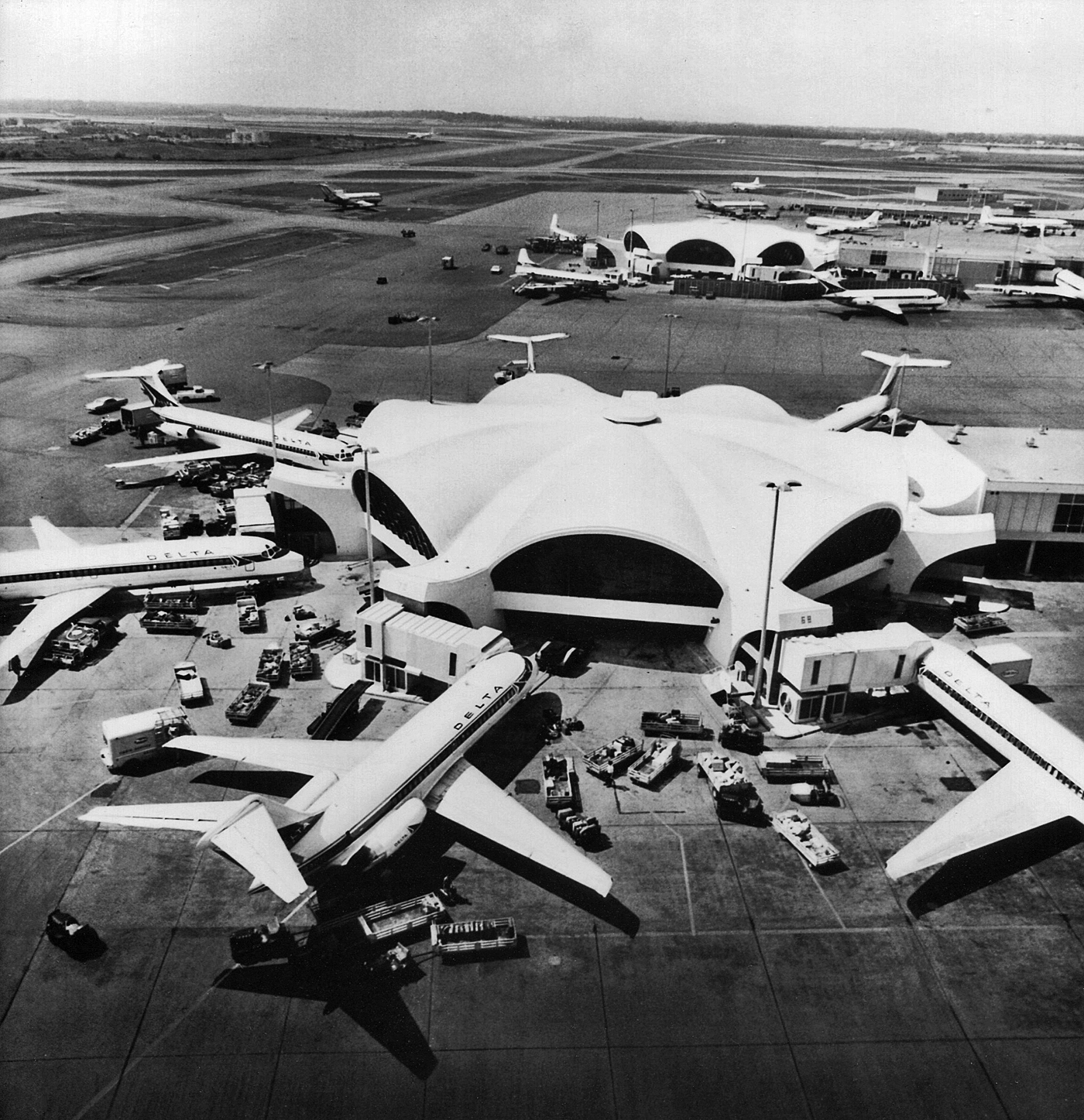 Below:  David says, "Here's a photo of stewardess Carol Koberlein posing in front of Delta's first DC-9 while the maintenance guys look it over. This would've been about 2 months before Delta put it into service and they took lots of publicity photos to show it off. I'm fairly certain they weren't using flight simulators yet, so flight training was conducted on the actual aircraft. Must have been a busy and exciting time."  Photo courtesy of the Georgia State University Library Archives, file #AJCP136-54a. 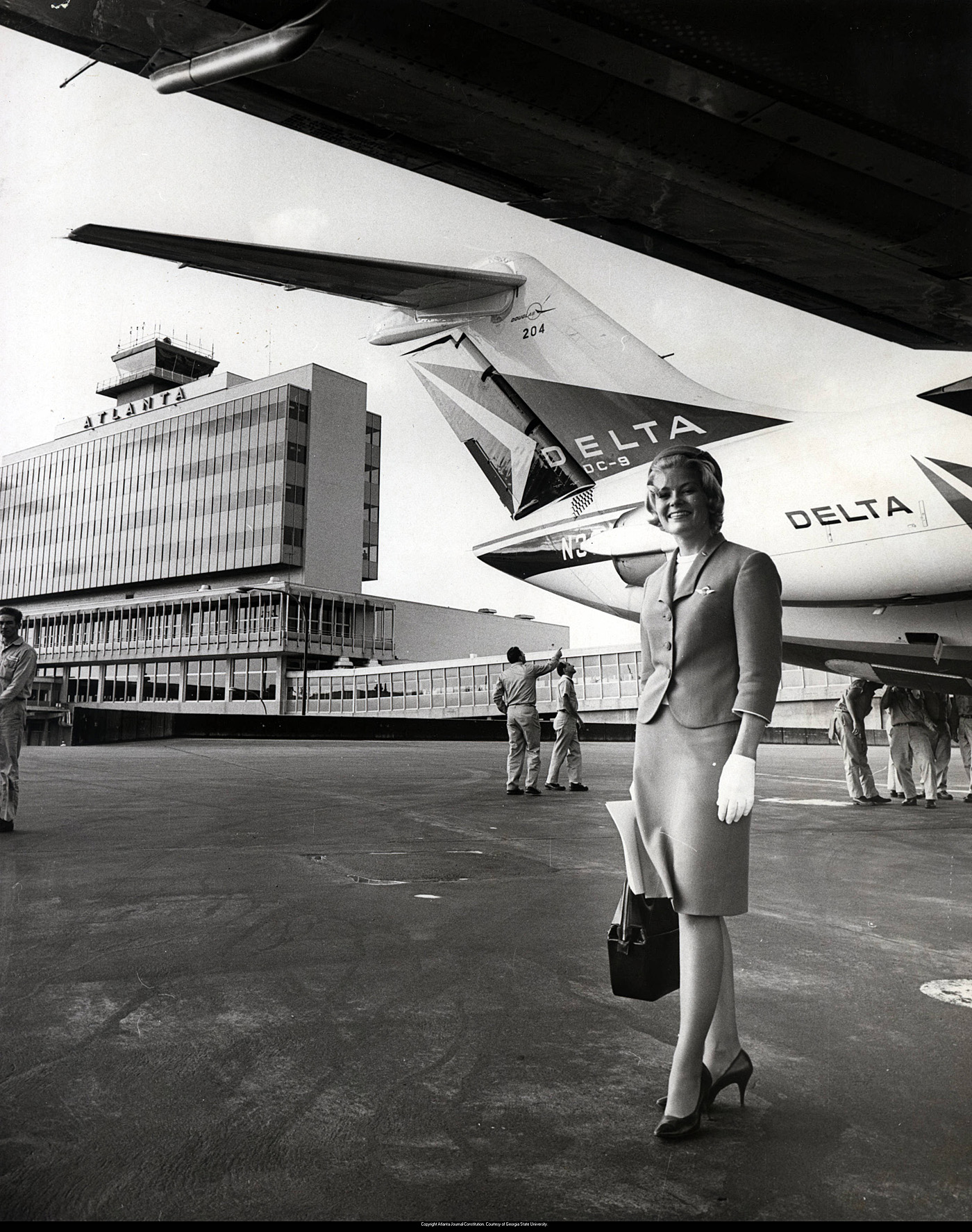 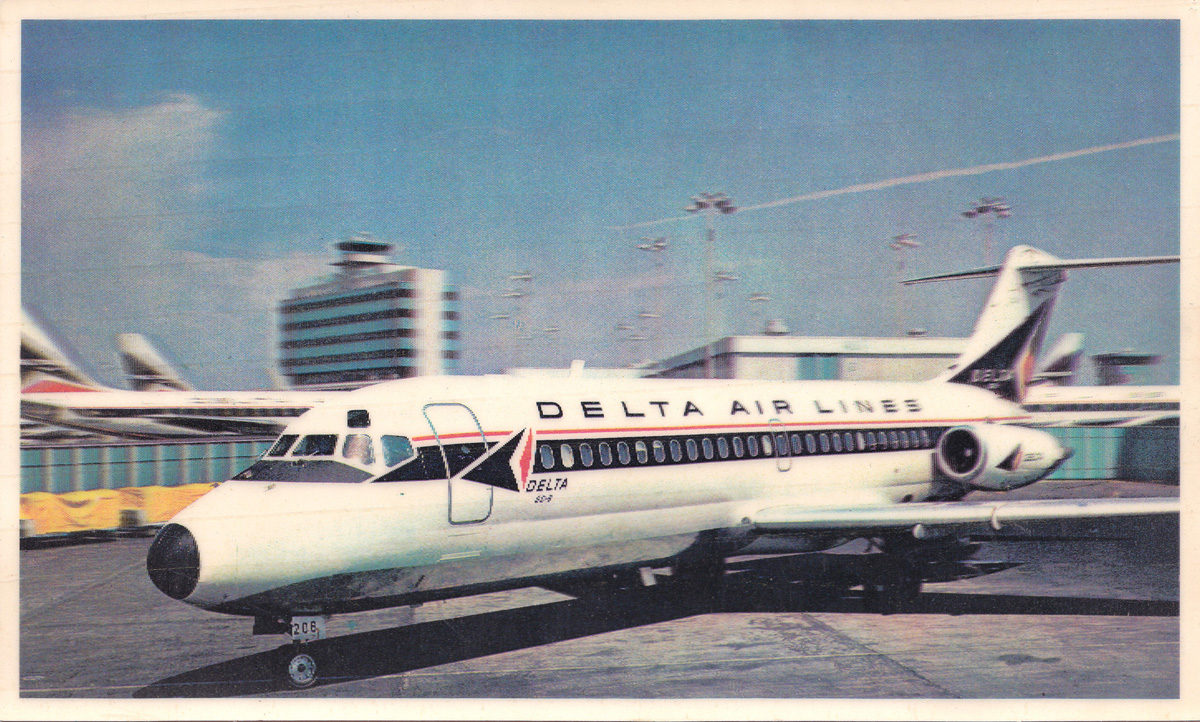 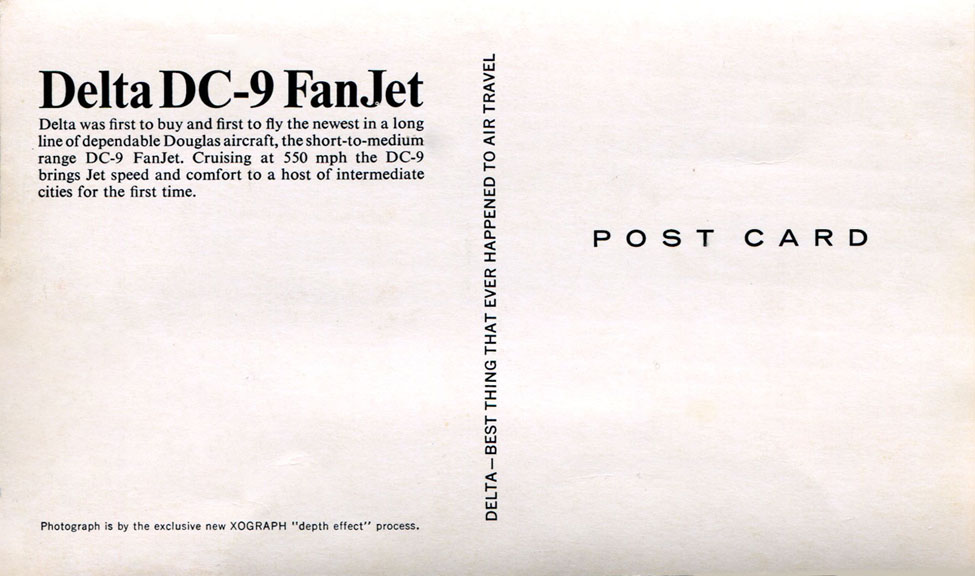