Many thanks to Arthur A. French III for sending in all the photos seen on this page.  His family owned and operated French's Ice Cream, which was located at 79-81 Georgia Avenue, just south of downtown.  First up, directly below is a 1949 parade photo showing a French's Ice Cream truck heading south along Peachtree Street (at Carnegie Way).  The company was started (under a different name) in 1911 on Flat Shoals Road in DeKalb County by Arthur A. French Sr. and his wife.  They moved to Georgia Avenue in 1921 and stayed there until the city condemned their property to make way for the Atlanta Stadium, prompting a move to 385 Grant Circle.  The company no longer exists, having been sold and transferred 2 or 3 times since the 1980s. 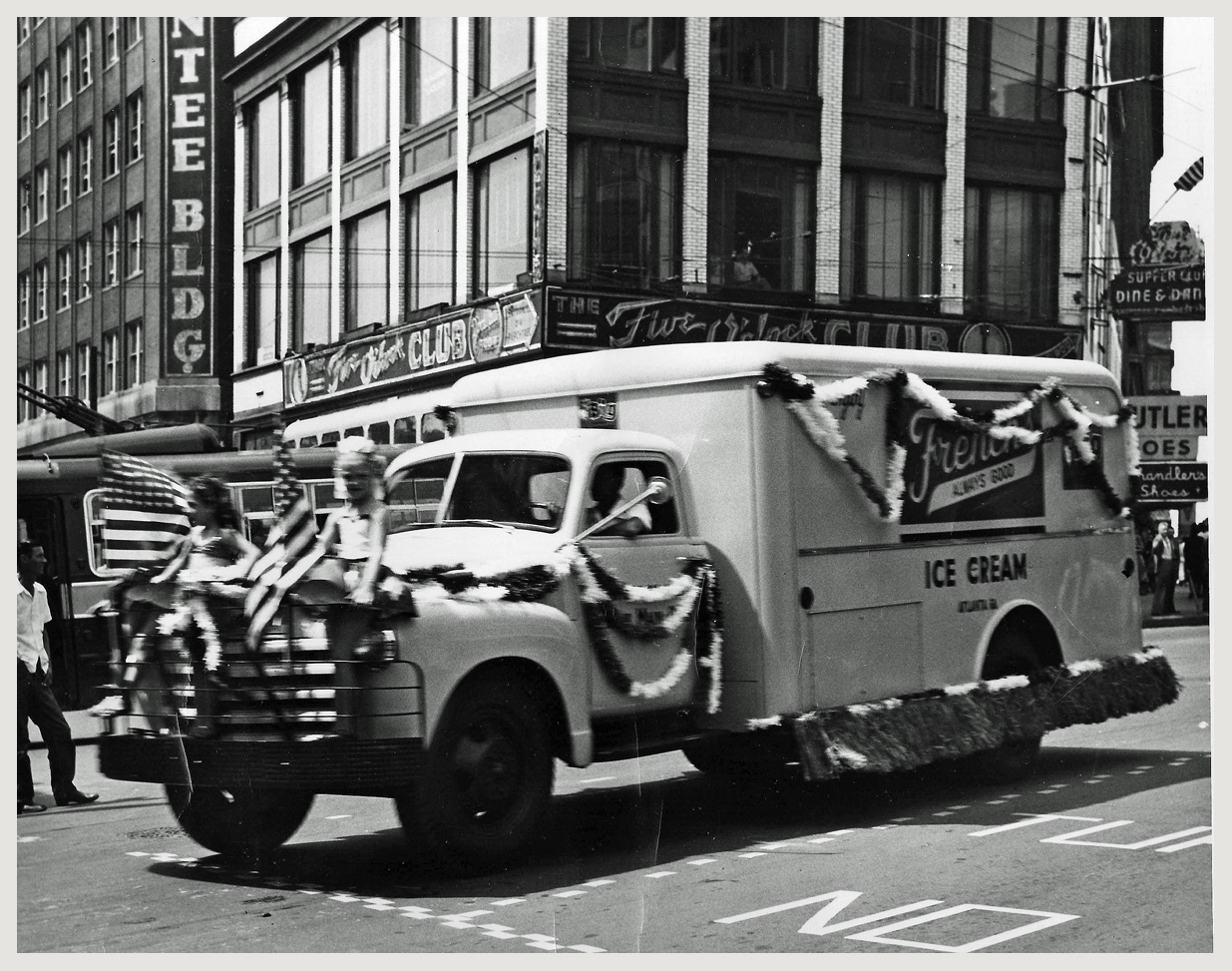 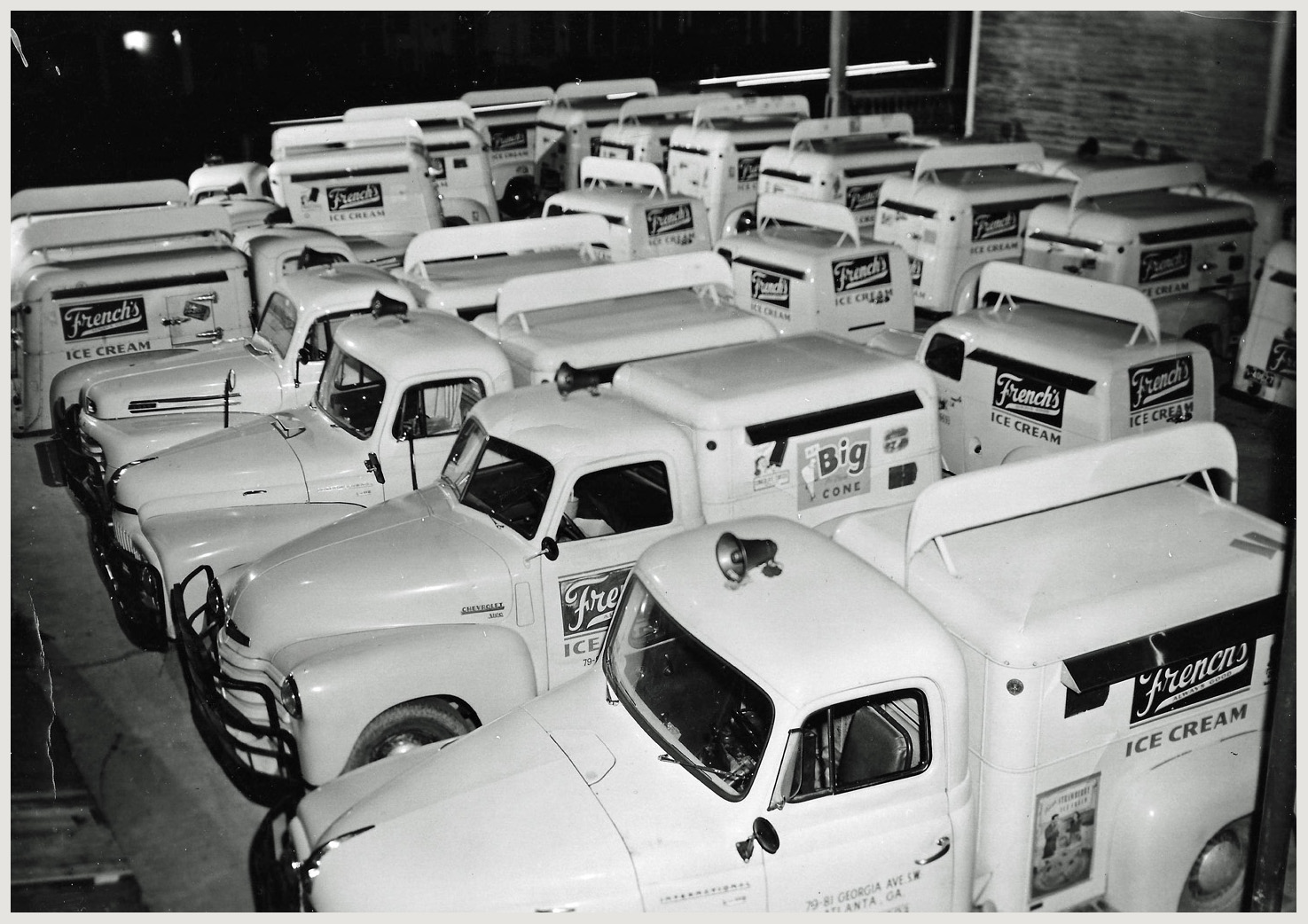 Above: an undated photo of the French's Ice Cream vehicle fleet taken at 79-81 Georgia Avenue, the company's manufacturing facility and headquarters. 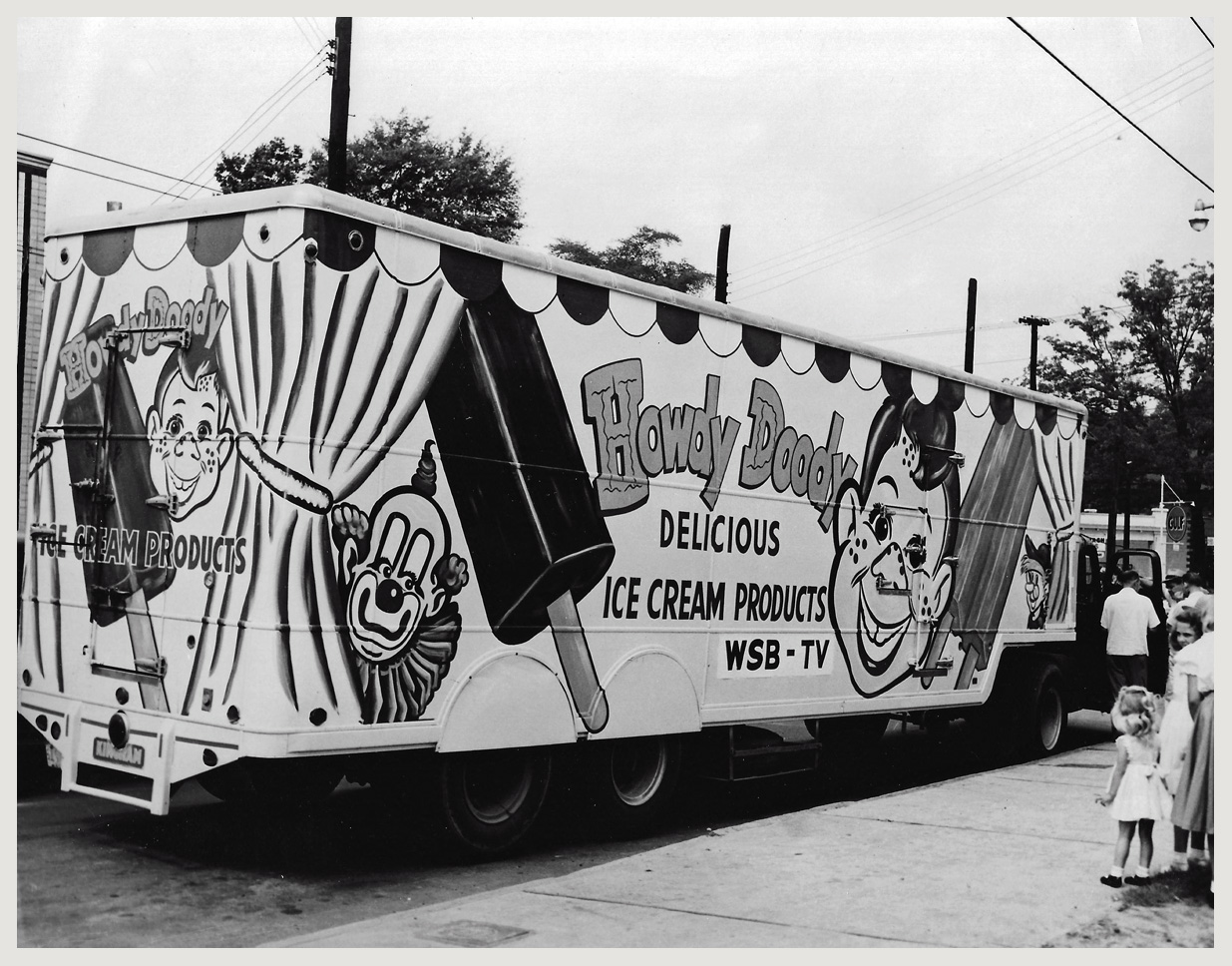 Above: an undated photo taken when French's Ice Cream was promoting Howdy Doody. 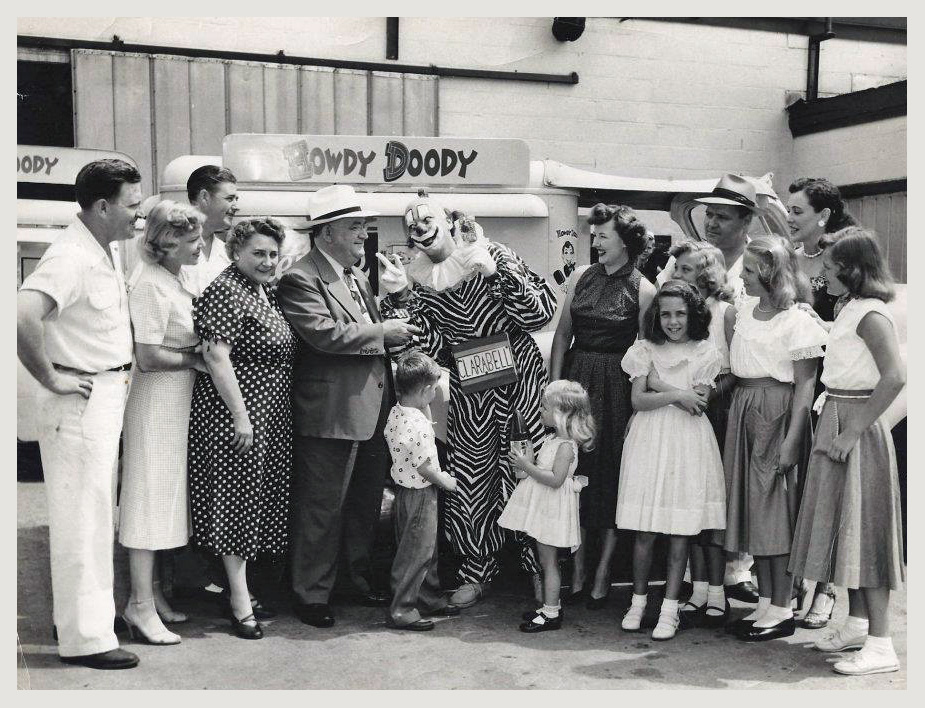 Above: Another undated photo, this one showing Bob Keeshan in his role as Clarabell the Clown, Buffalo Bob's sidekick on the NBC television program Howdy Doody. 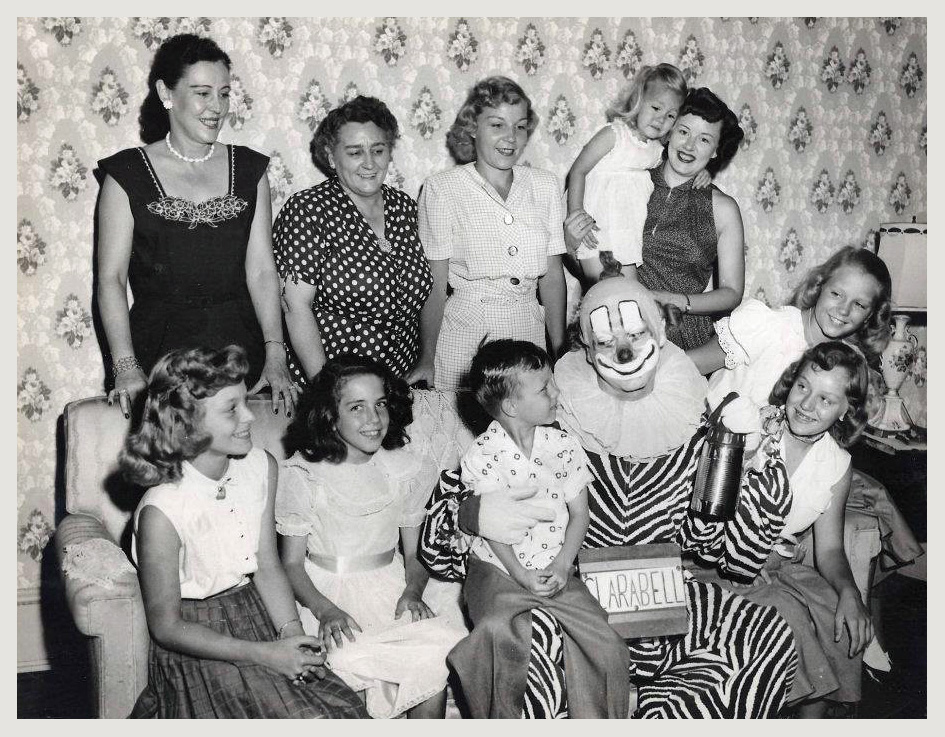 Above: the French family with Bob Keeshan in his role as Clarabell the Clown.  Keeshan left in 1952 and would go on to the role of Captain Kangaroo, which kept him busy for a few decades.  On Keeshan/Clarabell's knee in this photo is Arthur A. French III himself, who supplied all the photos and history for this page. 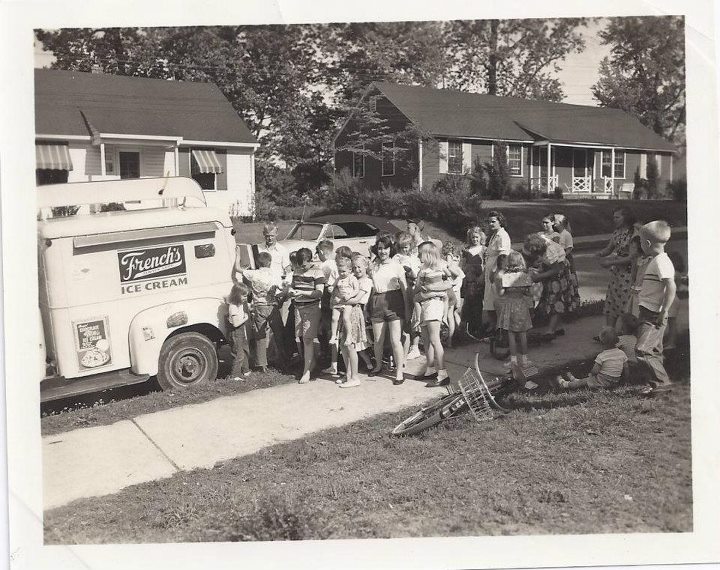 Above: a French's Ice Cream somewhere in Atlanta in 1960. 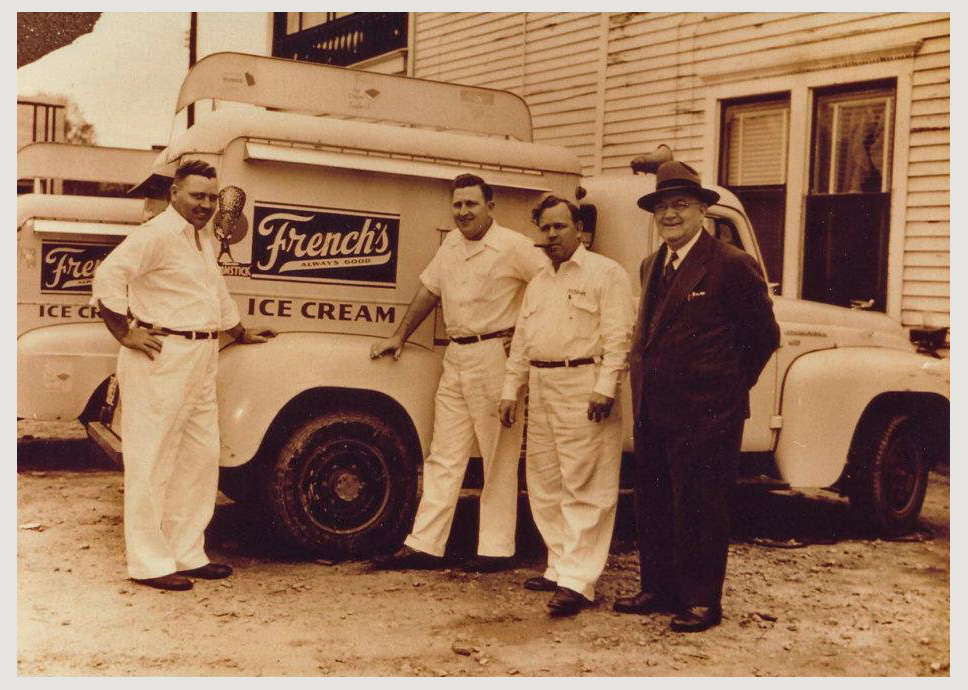 Above: Several members of the French family at the company's manufacturing facility and headquarters on Georgia Avenue.